Just what have we learnt?

It was a quite a shock for me when I found out that the Buncefield Oil depot had exploded. The explosion occurred on the morning of Sunday 11th December 2005, I was living in Kent at the time but I was born and brought up in Hemel Hempstead. My Mother and Stepfather were living in Woodhall Farm, which is about 1.5 miles away from the depot. My family were all OK, but their house suffered some structural damage. 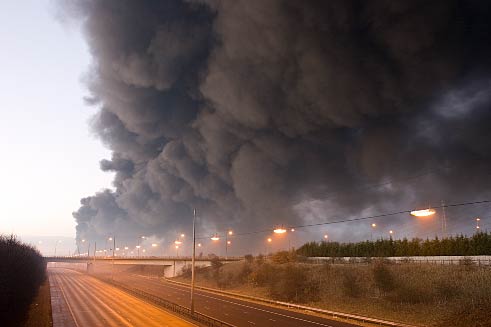 The depot had hazardous planning consent to store 194 000 tonnes of hydrocarbon fuels. Fuel was transported to these sites through three pipelines. The pipelines all transported fuels in batches. At Buncefield the various grades of fuel were separated into dedicated tanks according to the fuel type. The majority of fuel was then taken from the depot by road tankers. Jet aviation fuel was also supplied via pipelines to Heathrow and Gatwick airports.

The series of events that lead to the explosion started when unleaded petrol was being delivered through a pipeline into one of the tanks on Saturday 10 December 2005. The tank, which had a capacity of 6 million litres, was fitted with two safeguards against overflow. One was an automatic tank gauging system (ATG) which measured the rising level of fuel and displayed this on a screen in the control room and the second was an independent high-level switch (IHLS). This was set at a higher level than the ATG alarms and was intended to stop the filling process and sound an audible alarm should the petrol in the tank reach an unintended high level.

Both safeguards failed causing the level of petrol in the tank to rise unchecked. Eventually the level within the tank exceeded its ultimate capacity and petrol started to spill out of the vents in the tank roof. The overflow from the tank led to the rapid formation of a rich fuel and air vapour which started spreading in all directions, it reached a diameter of 360 metres. The vapour cloud was noticed and the fire alarm button pressed. The explosion happened almost immediately, probably ignited by a spark caused by the firewater pump starting.

The explosion and fire that followed, which lasted 5 days, were devastating to the area but that wasn’t the only disaster. There was also a failure of secondary containment at the site. The containment or bunding at Buncefield had many flaws, which caused large volumes of fuel, foam and firefighting water to leak out of the bunds and into an adjacent area which contained a number of drains and soakaways. The pollutants in this liquid run off consisted of PFOS (perfluorooctane sulphonate) from the foam, and hydrocarbons such as benzene and xylene. These pollutants have entered the chalk stratum below the site which is an aquifer from which potable water is extracted. The contamination close to the site did not affect drinking water supplies but the long-term possibility of pollution remains. The Environment Agency has a monitoring programme to check on the level of pollutants in the aquifer.

Like so many other major disasters, it wasn’t one thing that caused the problem but a series of failings that contributed to the cause. Behind all the technical problems and poorly designed bunding and containment systems, management failings were ultimately to blame:

The Health and Safety Executive (HSE) said the lessons learned from the Buncefield explosion led to “significant improvements” in the way sites operate.

Specific improvements include changes to the risk assessments of bulk fuel storage sites and better control systems for preventing the overfilling of fuel tanks. The HSE also adopted a “more cautious approach” to providing planning advice for land use around large-scale petrol storage sites.

A spokeswoman said: “It is an ongoing process and there should never be a day when industry thinks they have done everything and cannot improve.”